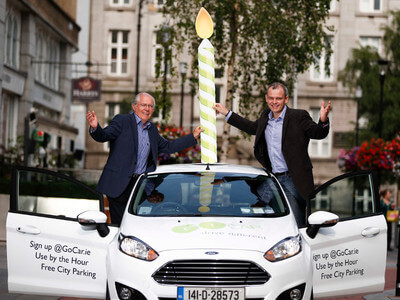 Ireland’s only car sharing initiative, GoCar today celebrated its one year anniversary following its inception on August 1st 2013. To celebrate their anniversary, GoCar is offering to waive the €50 sign-up fee for the service for anyone who joins before midnight on August 1st .

To avail of FREE SIGN UP just use the Promocode: 60HAPPYBIRTHDAY before midnight tonight(Aug 1st 2014), see below for Ts&Cs.

Since the service launched, GoCar has surpassed all expectations accumulating almost 15,000 trips, growing its fleet to over 70 vehicles and enjoying a membership base of over 2,000 people.

Membership growth for GoCar can be largely attributed to the license granted by Dublin City Council in July 2013 to operate on-street from their 30,000 pay-and-display parking spaces. This license enabled GoCar to initially place 50 vehicles from 31 pay-and-display locations in highly visible and convenient locations.

Dublin City Manager Owen Keegan said; “We are delighted to join GoCar in celebrating their one year anniversary in Dublin City. The entire scheme can only be described as a complete success and we are very happy with our decision to grant the First on-street car club license and car club parking permits last year.

BECOME A MEMBER OF GOCAR